Hi there XXXX -- how are you doing?

Yippeeee!!!!! Summer, high summer, is here! And what first springs to mind when I say "summer" in your shell-like ear? Why, outdoor music of course... and FiddleBop has lots of al fresco hot gypsy jazz lined up for you during the new month or three! 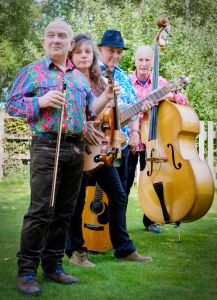 Actually, we've already had to bring out the suntan lotion (particularly for the more follically-challenged FiddleBoppers: some wear hats, some don't) at recent gigs. A week ago at The Nag's Head On The Thames in Abingdon (thanks, Lloyd) we were outdoors and Thameside, but it was still a bit on the cool and cloudy side. But then last Thursday, the terrace of Upton House was definitely a sunny summer-is-here gig (the iced Pimms was medicinally necessary, of course). And today's scorcher at Chipping Norton Town Festival was just plain hot, hot, hot...

Enough rambling! OK, so what does the rest of the summer hold for FiddleBop?

Next Thursday evening (26 June) we are back at the The Howard Arms, Ilmington: this is part of Shipston Proms 2014. A smashing pub in a pretty village, fine ales and food plus hot gypsy swing from FiddleBop: what's not to like?

Then on Saturday evening (28 June) we are at Upton Jazz Festival (in Upton-Upon-Severn, near Worcester) at The Star Inn, right by the waterside. Weather permitting, this will be an outdoor one (Jo and I went along for a chat with the landlady about the gig on our wedding anniversary last week. Now that's dedication!). Which will be fun, loads of, yes indeed: let the River Severn ring and ripple to that hot gypsy jazz! See you there?

A bit of a break for hols and such, then Friday 1 August sees FiddleBop back at a favourite haunt: The Norman Knight at Whichford. The beams will ring with gypsy swing! And the beer will flow, and the (really rather tasty) food will be chomped, and we'll all have a time as good as we always do at Tim's place....

And one other future gig that really excites us is FiddleBop's first London foray. This is on Sunday 3 August, Le QuecumBar ("The World's Premier Django Reinhardt Gypsy Swing Venue"), in south London. Woah! Real class at last! More about this one nearer the date :-)

OK, that's enough from me. Have a really great summer! And maybe see you at a FiddleBop gig?

For up-to-date info on FiddleBop's small doings, see https://www.facebook.com/FiddleBop. All the best!

All the best!
The four FiddleBoppers (Dave, Jo, Roger, and Martin)

PS We hope that you are happy to receive these email newsletters. If not, then email us at info@fiddlebop.org.