Charlie Fothergill was a guest musician for the first version of FiddleBop, which disbanded in December 2017. 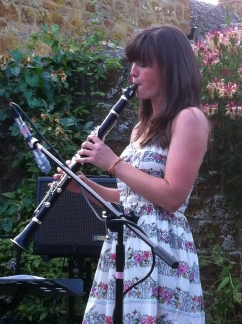 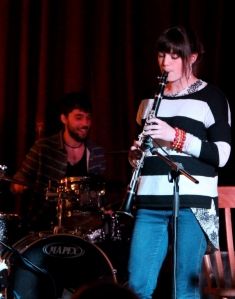 'C' is for Clarinet, and also for Charlie! And it's easy to see (or hear) why, since Charlie Fothergill plays her clarinet as if born to do so!

Charlotte (we think that's her real name, but she is silent on the topic) wandered up to us after a FiddleBop gig, announced that she also plays gypsy jazz, and so would we fancy making some music together sometime? And we're very glad that she asked!

Charlie was our musical guest at a good number of FiddleBop gigs, weaving her clarinet's mellifluous (yes, we like the word, too) melodies skilfully between and around violin and guitar. Thank you Charlie!

Charlie also plays with her own band, and at jam sessions such as the Hot Club D'Adderbury. And her Forages and Finds website is a must-read...