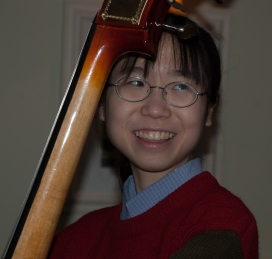 Esther Ng was a guest musician for the first version of FiddleBop, which disbanded in December 2017.

Esther Ng was FiddleBop's guest! She could be heard playing double bass at some of FiddleBop's gigs. And we were very pleased to have her with us!

Esther is a superb musician, who is a regular on the Oxford jazz scene. She does lots and lots of gigs, in addition to occasionally playing with FiddleBop. Yes, really lots and lots... Three gigs in one day sometimes!

Esther also plays keyboard and violin. She is based in Oxford, where she has recently completed her doctorate on Genomic Medicine and Statistics at the Wellcome Trust Centre for Human Genetics. She has a particular interest in epigenetics.

How on earth does Esther find the time to do all of this?